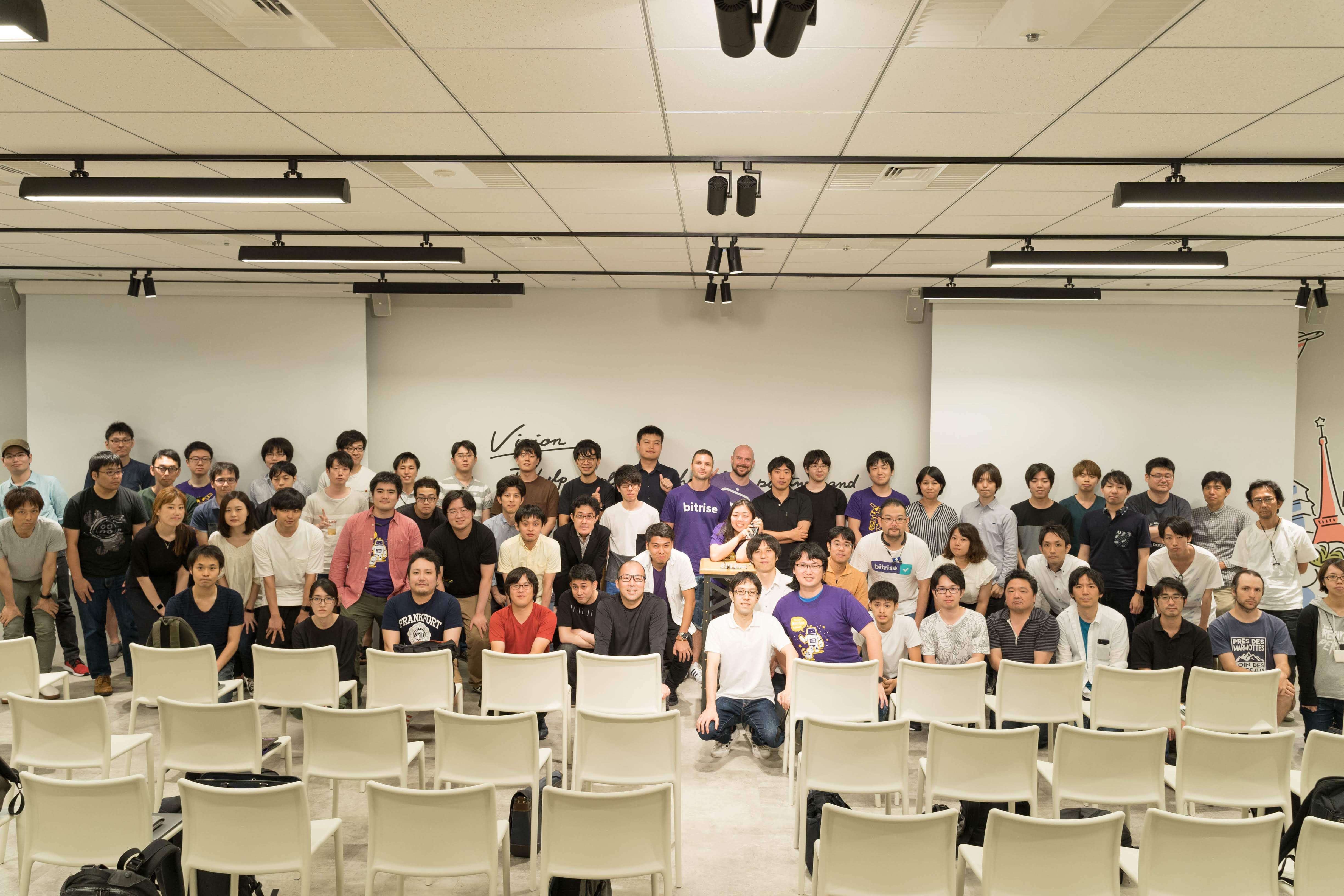 Last week in Tokyo, the world's first Bitrise User Group Meetup took place: Hopefully, one of many such community-organized, Bitrise-supported gatherings for developers to share, teach and learn about the ways in which Bitrise can help you build and operate better mobile apps.

It's not uncommon for mobile development workflows to be "whatever the first person that joined the company set up", plus some minor maintenance and necessary changes to keep the entire thing working. Even though easily automating those workflows when you start using Bitrise undoubtedly saves you some time and headaches, we aim to be more than just easy: We want to help you craft better, more efficient and more effective ways of building and operating mobile apps.

We put a lot of work into providing you with the tools necessary to craft these new processes, from the CLI to the project scanner and the step library to features like test reporting or the Bitrise API. For a large part, what you do with those tools is up to you, though. When I explain it to new hires, I tend to go for the Lego analogy: we simply provide developers with the different bricks, but you then go and turn them into a life-sized Iron Man or a full-scale X-Wing.

Similarly to what happens with Lego, we've seen you 'throw away the manual' and do amazing, unexpected things on Bitrise in endlessly varied ways. A lot of these great Bitrise setups are built by lone heroes: Developers that decide to play around a bit and soon find themselves having built an elaborate, but immensely powerful series of triggers and workflows for their team. We try to share their stories, experiences and insights where we can, but we also think there's immense value in sharing, learning and improving together in person. It's how we envision developers learning about - and embracing - mobile DevOps.

So what actually is a Bitrise User Group?

A Bitrise User Group (or BUG) is an informal group of Bitrise users that come together regularly to share insights and challenges with each other. The idea is to inspire, help and learn from other mobile developers, leading to new and more efficient processes along the way.

Who organizes these user groups?

Or you can, at least. If there's a high enough concentration of Bitrise users in your area, put something together on your meetup platform of choice and we'll fully support you in your efforts.

How does Bitrise support user groups?

We do a couple of things by default:

If you need something else, don't hesitate to ask. We're here to help.

How do you get started?

Currently, we don't really have a ton of automation in place to support these efforts, so just pop an email over to letsconnect@bitrise.io if this is something you'd like to explore. Someone on our DevRel team will help you figure out the next steps.

Like we pointed out in the intro to this article, the first BUG Meetup actually already took place thanks to the amazing work of organizer Satoshi Nagasaka and a little help from our Bitrise Japan team.

70+ Tokyo mobile developers made their way to the Eureka Japan office for 3 hours of presentations, discussions, drinks and food. 10 speakers put together talks ranging from 5 to 30 minutes on a range of topics. A quick recap of the proceedings:

Folio's Kishikawa Katsumi kicked things off with an overview of the many ways in which he used Bitrise to automate parts of their process. The deck is in Japanese and so it the corresponding blogpost here, but Google Translate actually goes a long way and there's always the Github repo that holds most of the configurations talked about.

Merpay's Yusuke Kita shared some knowledge on the why and how of creating Bitrise steps. He should know, as he contributed multiple steps himself:

Deploygate's Jumpei Matsuda spoke about continuous deployment in mobile development, including a brief explanation of Deploygate's role in that process and their Bitrise step:

The format chosen for this first Bitrise User Group meetup was that of 4 main speakers, followed by 6 shorter lightning talks.

First of these lightning talks came from ZOZO's Ryosuke Horie, who blew us all away with his Bitrise API x Google Assistant integration:

Something you really need to see on video to fully appreciate:

Second lightning talk came to us courtesy of Yoppie, who managed to rapidly rework his original talk about combining Bitrise with Deploygate after finding out there was quite a bit of overlap with an earlier speaker:

ecbo Inc's Tomohiro Tsukui (two2q) spoke about the many, many things he likes about Bitrise before CureApp's S Nakamura (nacam403) showed us how to use Bitrise to build React Native apps for staging or production:

Kazamasa Kawazure from Pixiv's Sketch iOS team shared the why and how of his newly submitted Bitrise step to detect UI changes in a build:

And last but not least, Kanari3 spoke about combining Bitrise and AppCenter for full deployment workflows.

What's next for Bitrise User Groups?

The second edition of the Bitrise User Group Tokyo meetup is already planned and graciously hosted in the DeNA Shibuya offices. With 150 members and counting, it's a great start for the format and we're confident more BUGs will pop up around the world. For now, we're immensely grateful to the Tokyo Bitrise community and I'm happy that we could actually be there to attend their first meetup. The atmosphere, the quality of the content and the food were all amazing:

Thanks and see you soon at a BUG meetup near you!